Ok, perhaps somewhat smaller in scope than the Jules Verne novel but our five days in Esfahan (once called ‘half the world’ by a French admirer) was a sampling of some of the world’s finest Islamic architecture. We stayed in a “suite” at the fabulously luxurious Hotel Totia (for a mere $25 per night) which was a very comfortable base for walking the length and breath of this beautiful city. Again this is a post best done by pictures so here are some highlights along with some of the better pictures… 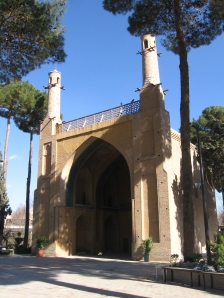 1. Shaking Minarets. There’s an old mosque on the outskirts of the city that’s famous for its ‘shaking minarets’. On the hour, a guy climbs up one of the two brick-constructed minarets that sit atop the entrance arch. He braces himself against the walls of the minaret and shakes it. The result is that the other minaret shakes as well. While many observers, including the authors of Lonely Planet, are sceptical, having seeing it in action, I am convinced that the phenomenon is real. Having observed that the second minaret shaking at the same frequency, (though half a cycle out of phase) and that the minarets are actually constructed using timber beams, it all makes perfect sense.

2. Imam square. This square, one of the largest in the world, is the 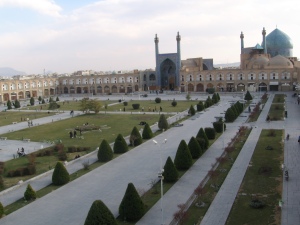 architectural heart of Esfahan with its stunningly detailed mosques and palace. While the crazy, crazy Iranian traffic spilling into the square detracts from the splendour, the people-scape at Friday afternoon Namaz (prayers) is fascinating. While the devotion of  some was evident in the legions of black-chador-clad women (they sometimes look like Sith lords which is somewhat scary) crossing the square to the carpeted prayer area, there was actually a lot of diversity. 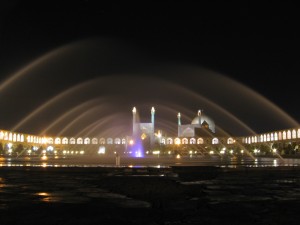 Sitting on the lawn one could see women chatting, families picnicking and playing football and men selling socks and looking for wives. Seriously, we chatted to one respectable looking chap who was scoping out faithful women and planned to send in his mother to close the deal if he saw anyone appealing!

3. Imam mosque: After many unsuccessful attempts, we finally did make it to this, reputedly one of the most beautiful mosque in the world. It did not 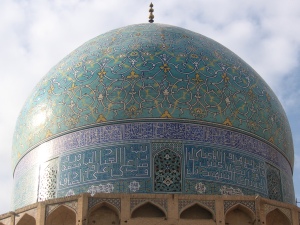 disappoint. The beauty of the mosaics is immensely striking even for a lay person who can’t read any of the intricate Quranic calligraphy but the real stunner is again the construction. The enormous double skinned dome towers 36 meters above the internal floor but  51 metres above the external courtyard. The gap between the inner and outer dome produces up to 49 echoes (12 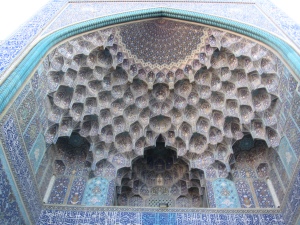 audible) within the massive space beneath the dome. We witnessed a young man stand in the ‘sweet spot’ and emotionally sing some of Hafez’s 700-year old poetry. This was a truly sublime experience as his passionate and pure voice resonated in the cavernous dome. A true melding of the best of Islamic and non-Islamic Persian culture.

4. The bridges: As Esfahan is built on two banks of a river, bridges built over the last 5 centuries mark a scenic walk along the riverbank. At one of  the oldest ones, Khaju Bridge (see top of page), the locals gather each dusk under the splendidly illuminated arches.  The men, of all ages, huddle together and sing the poetry of the great Persian poets  – many of which all Iranians know by heart. It’s a truly heart warming sight to see old men and young brave the chilling wind night after night to sing the timeless songs of their ancestors. Indeed the affection for the work of poets like Hafez and Ferdosi appears to be far stronger and universal than affection for the revolution or the government.

5. The Armenian Quarter: After 3 weeks in Iran, we finally made it to an actual, real, operational church! True to form, the experience was totally different from any other church experience. This is not too surprising as this was an Armenian Catholic Sunday Mass. Heaps of incense, the Archbishop in super ornate robes and a crown, facing away from the congregation, the whole mass being sung, everything in Armenian, it was all new! But a great chance to see a reasonably vibrant community (familiarly, pretty much all women) of Christians in Iran.