Marist Mission Ranong or MMR as it’s usually called, has been around for a few years now. Those who have been following this blog, will know something about our basic education, community building, HIV/AIDS and now tertiary education programmes. From the most precarious of beginnings – a couple of Marists turning up on a bus following rumours and whispers of silent suffering – through tumultuous and dangerous growth pains we are now a somewhat stable wee mission here on the Thai-Burma border. Some, most notably the founding director Fr. John Larsen, might say that stability is a weakness. It is by existing in the same precarious position in society as the most vulnerable migrants that we can truly relate to them, be present with them and minister to them. Others might argue that stability is the consequence of competence and the precursor for solid partnerships and authentic dependability.

For years, we struggled to find facilities for rapidly evolving programmes, that responded to the ever increasing needs we were discovering. An old apartment for a classroom, a former brothel for a house, an old factory for a community centre; the disused upper room for a Kindergarten. Each new facility was a huge blessing because despite what it was not, it was a space to gather, learn, help and befriend.

Through all these years, we’ve all dreamed of having a place to call our own – a centre where we would be safe. Somewhere the kids would be safe, and could play, where people could walk from their houses or take the local public jeeps, somewhere we could have a simple shelter for AIDS patients driven from their homes, somewhere where each of us – Burmese, Thai, Italian, Filipino or Kiwi – could call home in Ranong.

With most dreams, you usually need an engineer and a pile of money if you actually want to realise them. So it was in our case. After years of dreaming and talking, we finally decided to buy some land and look for money to build a building.

Since I was naturally the right person for be in charge of all things building related, I took on several new roles – Project Manager, Property Expert, Project Engineer, Architect, Site planner, Programme Manager, Chief Fundraiser and Financial Manager. I set about working out what our requirements actually are and will be in 10-15 years time – from there how much space we needed for everything and from there how big a site we needed. Once a small football field was included, I calculated we needed at least 2,400m².

In January we purchased a plot of land 3,200m². Then we got round to planning our spaces and designing our building. 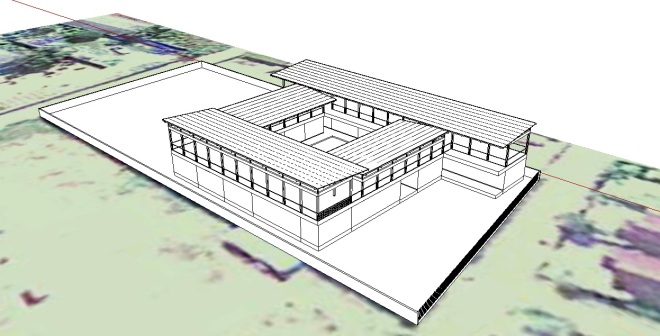 Fortunately I’ve had the priviledge of working with some of the finest building professionals Wellington has to offer and that experience gave me the confidence to do this on my own. Now while it might have seemed that I found those endless discussions about ceilings, solar shading, daylight penetration, thermal mass, acoustic insulation, stair widths, landings, roof drainage, space connectivity, security perimeters, pedestrian flow, toilet door locations, cost escalation, flooding risk and goods access (to name a few) a bit boring, I was actually surreptitiously paying attention and squirreling away useful bits of advice in case I found myself in my current predicament.

If it is true that a little knowledge is dangerous, then this building could be a giant hazard… with my name on it.

But never fear, I only did the space planning and left the structural design to a local professional firm. It may be comforting (or not) to know that the engineer in charge actually has a day job as a local government building inspector, but moonlights as an independent structural engineer/designer. I wonder if he gets round to inspecting those buildings he’s supposed to…

Anyway with the design done, we tendered it to three builders and fortunately we were filled with confidence by the one with the lowest price. The current state of affairs is we have a draft contract with staged completion targets and matching payment installments. We’ve secured roughly 75% of the funding we need, but we’re still short of some €50,000.

Now, as those of you in NZ reach for your cheque book or the phone number of a generous corporate sponsor, you may want to hold fire for a little while. Nuala is working on an application for charitable status with the NZ Charities Commission. If this is successful, we will be able to issue receipts for your donations that are then tax-deductible.

It’s been an surreal journey to date – from the calculations on space and area at the very beginning, through to looking a detailed plans and contracts now. We’ve got the crucial hurdle of finding the rest of the money (we’re working on a number of options) before we can celebrate  the first massive milestone – signing the contract.

I’ll end by saying that in all seriousness, if you do want to contribute in any way – donate a classroom, a toilet, the roof, the rainwater tanks, the lights whatever, do get in touch. I’m sure it will be possible and I’m absolutely sure it will be appreciated.